Just got an incredibly deep and insightful review of my “This Dark Age” series from Castalia House. The reviewer — Jon Mollison — really seemed to capture the spirit of the novels, and I’m flattered that I seem to have hit the notes soundly for him (and for me).
Check it out….

This one is by “The Novel Enthusiast.” I remember she was turned off by how dark parts of book 2 were, although she reviewed it favorably. I contacted her because “Hopper House” isn’t quite as dark, and is often more fun and adventurous, if anything. Also, it departs from the ride/ride/ride model I used in book 1 and 2. There are rides, yes, but Dan’s starting to make new friends and break out of the hole he’s been inhabiting for 20 years.

Have a look, and be sure to thumbs-up 🙂

Ultimate compliment: “I want to kill him and publish his books as mine.”

Here’s a wonderful post by E.J. Robinson saying scary, yet flattering, things about my typing practice. I was planning on letting everyone know that I’d published a “Binge Edition” (boxed set) today, and this is a good way to do it.  Have a look over on Robinson’s site to see the new cover  🙂

Some early reviews for Hopper House

Hopper House comes out this Saturday. I didn’t send the book out to tons of people to review, but I did send it to two folks I know. One, Patrick Stemp from the TBR Podcast, who gave it a review on Goodreads.  Another was from science-fiction author Simon Cantan, who reviewed it on Goodreads, too, but offered a more detailed review on his website.

I’m flattered that anyone would read my writing, let alone review it. Thank you Simon and Patrick.

Just finished “The Broken Clock” by P.T. Hylton. Get ready for some gushing.

The Broken Clock was one of the best conclusions to a trilogy in my recent memory. Surprisingly good — stunningly good. I mean, I knew P.T. Hylton was a good writer. That’s why I added him to my Awesome Indie List last year. Because he can write his ass off. But I didn’t expect him to freak out and bust the glass with such a solid slam dunk. Who the hell does he think he is, anyway? As my great great grand daddy used to say, “It ain’t natural, is what it ain’t. That boy’s got the devil in him.”

One of the side-effects of writing novels is the effect it has on a writer’s ability to enjoy books by other people. Not all writers — I’d never speak for all writers. But I know from talking to many of them that they feel the same way. When we read a book, we see the puppet master pulling the strings. We see the flaws: easy conclusions, forced motivations, lifeless turns of phrase here and there pulling us out of the story. For me, because of my lazy nature, yet another barrier hangs between me and a good/easy read. I know how much effort goes into writing a book, and sometimes reading feels like relaxing three feet from someone chopping a season’s worth of firewood. It’s distracting. Sometimes it’s embarrassing, when the flaws are really big.

I felt none of this at all while reading P.T.’s book. I’m not saying the book was perfect. I love Robert B. Parker’s books, but none of them are perfect, and I’ve read something like 40. Same goes with Jim Butcher (though, to be honest, he’s pretty damn close to my vision of perfect, the bastard). What I’m saying is, P.T.’s book swept me away. I fell in love with the characters in a way that I hadn’t expected to. P.T.’s biggest strength has always been plotting. His first two books were plot-driven. This third one was definitely plot-driven — but it was also character driven. That combination turned what would have been yet another good P.T. Hylton book into P.T.’s first masterpiece. 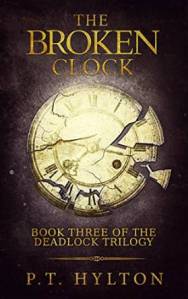 A few weeks ago, I finished Harvey Click’s sequel to Demon Frenzy, titled: Demon Mania. I absolutely love Harvey’s writing, and though I tried mightily, I couldn’t resist emailing him and saying how awed I was by his storytelling abilities.

I won’t bog this post down with a synopsis, except to say it starts not too long after book 1 left off, with Amy (the main character)  being forced to dip back into a world she thought she’d left behind. Fans of the last book will rejoice at old characters returning (this was my absolute favorite part — all the characters). I loved the demonology, the realistic magic I call “magical realism” (I’m sure someone else has coined the phrase already).

I’m looking forward to as many more books as he’s willing to put out. Honestly, having read all his books so far, the guy could write a shopping list and I’d read it.

If you haven’t read book 1, you’re in for a treat — here’s the cover by Keith Draws (a great artist). Buy it, I promise you’ll love it.

Infographic: Why Is It So Hard To Get Book Reviews?

Infographic: Why Is It So Hard To Get Book Reviews?.

Picked up a nice blog review of “Kick,” by author C.W. Thomas

What a surprise when I found out about this today (spoiler alert, he liked it):

Over on the right side of his blog I noticed he also recommends Harvey Click’s book “The Bad Box.” In the back of all my books, I mention the Awesome Indies. Assuming that’s how Mr. Thomas discovered the book, I’m glad to see my attempt at cross-marketing being successful.  Way to go Harvey.

Here’s a lovely quote I snagged:

“John’s work here is reminiscent of Donald Westlake, one of the masters of the genre. And that’s one of the highest compliments I can give because Westlake’s work is all about immersing you into the world of real criminals doing real crimes.”

I totally have to pick up something from this “Donald Westlake” fellow — sounds right up my alley.

One thing about E.J. Robinson: I read his book and told him how much I loved it. He turned around and read all of mine (hehe). About two months ago, long before he’d written his blog review, I’d asked him to join the ranks of the Awesome Indies. He plans to, but wants to do a final sweep through his book to make it absolutely perfect for an upcoming promo he’s doing. I admire his professionalism. In respect of his wishes, I’m holding off the “official” announcement until later. But stay tuned!

From one author observing another, I couldn’t help admire the beautiful cover of her debut novel Hope of the Pharaoh.

Tagged as book reviews, Hope of the pharaoh