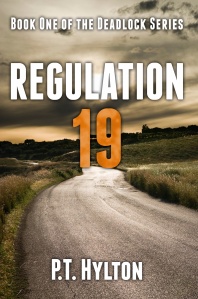 The only way “Regulation 19” could have been better is if it was called “Regulation 20”. An incredibly memorable read, it mixes elements of thriller, mystery, sci-fi, and (possibly) fantasy. As Einstein once said, “When you mix sci-fi and mystery together and dribble in what may or may not be fantasy, you’ve got yourself a damn fine novel.” And I agree.

I’m not telling you the plot. The plot is a mystery, to be honest. That’s what’s so damn maddening about this book—I never knew where the story was going beyond what I’d just read. Every page brought new information. Every chapter was like this gargantuan mystery/thriller/sci-fi (fantasy?) looming above me, laughing, and taunting and saying, “Try again Mr. Smart Guy!”

Ok, quick point on the plot and I shall say no more: it’s about a town in Tennessee. Something’s happened regarding the town. There are good guys, there are bad guys, there’s a REALLY bad guy, and that’s all I’m going to give you. Except for one thing: one of the characters is named “Frank.” You learn this right up front, so that ain’t gonna help you.

P.T Hylton eschews both plodding pseudo didacticism and/or the emollient locution typifying some of indie-publishing’s more inchoate scribblers—and after you’ve read the book, I’m sure you’ll feel the same way. Furthermore, he writes like his ass is on fire. He writes so well he makes me want to slap my momma’s English teacher. P.T. Hylton’s writing is “invisible” – you don’t know you’re reading a book, you just know you can’t stop grinning and your wife’s given up on you coming to bed anytime soon. Hylton’s pacing is so maddeningly sneaky and miserly in the way he parcels out the juicy bits that I’m just a tad jealous of him. Everything in the book furthers the plot. Not a moment is wasted on nonsense because there simply isn’t time for that. If you go back and watch those Jim Butcher videos about scene->reaction->scene->reaction, Hylton seems to have channeled Butcher in the way he approached “Regulation 19”. When I interview him, I’m going to ask him about it. Also, he had near perfect editing. What’s not to love?

The characters in the story all had their own voices and motivations. There weren’t any talking heads saying stuff like “as you know, bla bla bla can run 60 miles an hour” or whatever. There’s also a sort of manliness to the guys in the book, which almost makes me think P.T. Hylton was either in the military at some point or possibly in prison for armed robbery. Probably a military prison. When I do my interview with him, I’ll ask him about his “jacket” (he’ll know what I mean).

P.T. Hylton reviewed my book, “Kick”. He also did a book giveaway featuring my book. I kinda wish he hadn’t done these nice things. I would have told him not to if I knew his book was gonna be so amazing. I’m telling you all this because I believe in full disclosure. Would I have read his book if I hadn’t followed his blog, if one thing hadn’t led to another? Probably not. There are simply too many books out there to choose from, and these days I don’t get as much reading in as I’d like (sorry James Patterson, I’ll read something by you one day, I swear). But I have read it, and on my honor I promise you this was one of the most memorable sci-fi/mystery/(possibly fantasy) books I’ve read in a long time.

One of the rules of the Awesome Indie Project is that if I know someone even slightly, or if they’re friends or whatever before I pick up their book, then I can’t add them to the list. This was meant to keep me from giving-in to the natural desire to help my friends. The problem is, awesome indies like P.T. Hylton get skipped over for the crime of being nice to me. I don’t want people to stop being nice to me or stop approaching me and saying, “Hey John, what’s up?” So I need to nix this rule. Just keep an eye out for the disclaimers, and give P.T Hylton a chance—he’ll blow your mind.