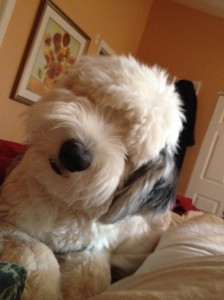 I opened my eyes and saw something shaggy and terrifying, looking at me.  My Old English Sheepdog, Peekaboo, with her head on my chest. I was in bed and she’d woken me up.

She wiggled a little and somehow snuggled closer, like I’d invited her.

“Oh, you want a scratch huh? Why should I do that?”

As if saying, “Because I’m cute,” Peekaboo whuffed once and sneezed. Sneezing: one of her favorite things to do.

When I got back, she was lying in my spot with her furry butt resting on my pillows.

She opened her mouth and let her tongue loll out, as if to say, “It’s my bed now, why don’t you try sleeping on the floor for once?”

“Because I’m a human-frickin’-being, that’s why,” I said.

She quirked her head at me, a thing sheepdogs do, which means, “What does one thing have to do with the other?”

She dropped head onto her paws, considering, then abruptly let out a big yawn, as if saying, “I may not buy the food, granted, nor work for it, but those are two things you do that I cannot. To put it in your own crude terms, I am a K-frickin’-9. Even so, clearly I can lay in this spot, in bed, while you stand there lecturing me. Just like you can lay on the floor for once.”

“I don’t have time for this, you mangy critter. Come on, I’ll get you some food.” Then I made like I was walking away and hoped she’d follow.

I looked back and said, “You’re hungry, right?”

Peekaboo wiped her snout with both paws like she’d gotten something on it, which meant, “What’s for breakfast?”

“Then no,” she as much as said, and closed her eyes.

This had gone too far.

“Peekaboo, you gotta get out of my spot!  It’s still too early for me to be an hour late.”

She didn’t move. Which meant, “I”m not moving.”

“Oh you’re not moving, huh?  How about a walk? You know how you like walks…”

“Is that all you know how to say?”

“Dang it Peekie, get out of that bed right now or I’m getting the cat!”

Her head popped up. “No, not that! That thing has claws!”

Peekaboo let out a low growl.

“No, you listen,” I interrupted. “You know what I go through every day? They expect me to smile and be nice when they pass me in the hall.  They expect me to reply to their dumb emails all day.  They expect ideas and teamwork and status reports.  I can’t handle it anymore!  All I want from life is doughnuts, a wife who buys me doughnuts and a dog who sleeps on the floor. Is that too much to ask?!”

Peekaboo sighed, then got up and hopped down off the bed.  She made her way to the door in the sheepdog way–slowly–and looked back, as if saying, “Get the leash, human, I gotta pee.”

Tagged as being late for work, muttaphysics, peekaboo, sheepdogs