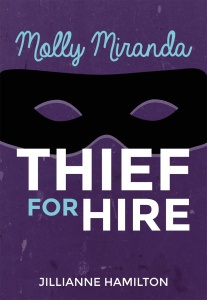 I ran into Jillianne in the comments section of the Sell More Books Show, then immediately checked out her new book, Molly Miranda: Thief for Hire. After reading the exciting first chapter, I felt compelled to contact her.  She was really cool, answered a bunch of my questions. There were a great many similarities in our interest in things thiefy, as well as the research we did before writing our respective caper stories. When Jillianne suggested we interview each other and post them today on our blogs, I enthusiastically agreed.

Tell us about Molly Miranda. What makes her tick?
JH: Molly Miranda is in her early twenties and has a pretty average life- except for the fact that she makes her living by stealing big ticket items like art, jewelry and the odd historical artifact. She doesn’t really consider herself good at anything else and gets twitchy when she’s not out on assignment. She feels safest when she’s just acquired a hefty amount of cash as money equals stability. For Molly, financial security equals happiness.
Have you always been interested in thieves in fiction? If not, why now?
JH: Not specifically. I knew I wanted to make Molly a criminal. I initially considered making her a hired assassin but thought it might be easier to make her a likeable character if her crime didn’t physically hurt anyone so I made her a burglar who steals items from people who can afford to have things stolen from them. Plus, my book is a comedy. Much easier to make a book funny and light-hearted if nobody is being murdered. Once I decided to make her a thief, I did some research and became fascinated. Obsessed, even. I think I could pull of a decent heist if the opportunity ever came up.
What sort of research went into Thief For Hire?
JH: I basically inhaled Confessions of a Master Jewel Thief by Bill Mason. Such a fantastic read. Like, ohmygod. Unbelievable. I also read Catch Me If You Can by Frank Abagnale, The Rescue Artist by Edward Dolnick, The Thefts of the Mona Lisa by Noah Charney (Charney is a fantastic wealth of art theft information) and The Gardner Heist by Ulrich Boser. I’ve also watched a lot of documentaries (mostly via YouTube) on art forgeries, art thefts and famous thieves like Bonnie and Clyde.
I see that Thief For Hire is your only book on Amazon. Have you written other novels? Short stories?
JH: Molly Miranda: Thief for Hire is my first published novel. I’m currently working on the sequel. I’ve been writing fiction since childhood. I also have a free ebook on blog design available on my website. (I’m a web designer in my 9-5 life so I’ve got some knowledge on the topic.)
Considering many people have been victims of theft, did you have any moral qualms writing a positive portrayal of an unapologetic thief?
JH: During the writing of Thief for Hire, I didn’t feel too bad about writing Molly’s crimes. There are people who get hurt during the course of the book, but not by Molly specifically. She doesn’t want to hurt people and she’d never steal from people who financially struggle. Example: if she found a wallet with a thousand bucks cash in it, she would try to return it. She enjoys the challenge of the theft as much as getting paid for it. In the sequel I’m writing now, I did feel a little guilt writing this one scene where Molly has to get a teeeeeeny bit violent. But nothing serious. I’m sure more scenes will come up where I’ll feel guilty writing them because Molly isn’t exactly innocent… but you just have to deal with that if you are going to write a character who makes her living as a criminal.
—
You can read Jillianne’s interview of me over on her blog: Jillianne-Hamilton.com