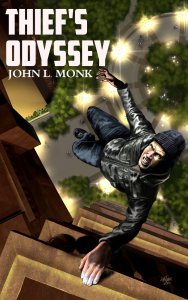 Two years ago, I wrote Thief’s Odyssey from a sense of frustration with Hollywood movies that depict thieves. Often they were bang-bang bank robbery stories (tons of them), had overly elaborate stories relying on a magical hacker to open the vault (Die Hard), the steps involved in breaking in somewhere were impossibly timed (Hudson Hawk, Oceans 11-25), or the breaking-in relied on a lot of messy destruction and vandalism (The Score).

By the way, I loved Hudson Hawk and The Score.  But I wanted to write the kind of story that really fleshed out the myth of the “Master Thief.”  Someone who looks at what he does as almost an art, does it for the challenge alone, and isn’t constantly promising his girlfriend, “This is the last job, baby, I swear…then we’ll get that white picket fence.”  I also wanted to show realistic depictions of safecracking, lock picking, the bypassing of alarms, hacking, identity theft, and even smuggling.

Fans of Kick will enjoy the loner main character, and the first person narrative (though somewhat more hard-boiled than Dan Jenkins). And if you’ve ever flushed with excitement after swiping a grape at the grocery store, you might enjoy all the cool crime going on, too.

One of my big inspirations when writing Thief’s Odyssey was Bill Mason’s non-fiction memoir, Confessions of a Master Jewel Thief — highly recommended.

Filed under Writing in general