Ok, so I was going to do this big shiny post on how the sequel to “Kick” was now for sale, and then a wonderful reviewer who’s already read a copy published a review on her blog (please go there, witness her heavenly prose, hit ‘like,’ relblog — win millions of karma points).
So yeah — I published the sequel. It’s called “Fool’s Ride” — currently available only on Amazon.
I will write more about it later.

Daniel Jenkins repeatedly returns to earth in human form to atone for his sins and deliver some good old-fashioned, oh, so gratifying, vigilante justice. Fans of Kick (The Jenkins Cycle Book 1) know Dan committed suicide while in college, bleeding all over the bedding of the girl who’d jilted him. Horrors! What in the world could entice me to spend a whole novel in the point of view of a thoughtless, self-pitying loser like Dan? Does the writer even live who could interest me in this guy’s miserable hereafter? Yes, yes, and yes again. 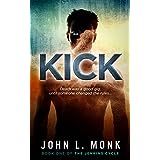 Alas, poor Dan. He comprehends the magnitude of his stupid act of suicide. His guilt is so stupendous, he somehow finds himself entering the body of a living human man. What happens to the guy’s soul while Dan…